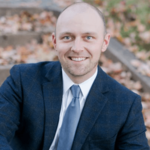 Cooper Law Firm is rooted in Cape Girardeau and Southeast Missouri. We are dedicated to fighting for the legal rights of area families. We represent clients in a range of legal matters related to criminal defense, personal injury, estate planning, and family law. Our team is all born and raised in the area, giving us the perspective and insight to manage our clients' local problems by applying local solutions. We fight for one client at a time, working aggressively to meet their legal needs. Because our practice focuses on multiple areas of the law, it gives our clients the best chance for a positive outcome to their legal matter, as we find that more often than not, many areas of the law are intertwined. It is imperative for your legal counsel how the law works together, which is exactly what you will find with the Cooper Law Firm. For more information about our team, please view their individual profiles below.

Brandon is Southeast Missouri born and raised. He is a graduate of Cape Central High School, where he excelled both in the classroom and on the field, as he graduated among the top of his class and earned statewide recognition for his performance in baseball. He then went on to attend college at the University of Missouri in Columbia. During his time at Mizzou, Brandon began to develop his leadership traits that he has carried with him in to his professional career. He was elected to serve on the executive board of FarmHouse Fraternity, and played a large role in organizing fundraisers for local branches of national charities such as Big Brothers Big Sisters and Habitat for Humanity. Brandon was also an active member of the Young Republicans Club, where he volunteered on statewide elections.

After earning his Bachelor's degree, Brandon then went on to attend Law School at Oklahoma City University. There, he began his law practice, as he worked as a Licensed Legal Intern with the firm of Cathcart & Dooley, PC, a downtown boutique firm in Oklahoma City,

while keeping up with his course work at school. Once he passed the Missouri Bar Exam, Brandon returned home to Southeast Missouri, where he began his practice with the Tweedy Law Office, LLC, in Bloomfield, Missouri. During his time there, not only did he begin to fine tune his legal skills in the courtroom through handling multiple domestic and criminal cases, he also became a leader in the community, serving as the President of the Stoddard County Bar Association, Vice President of the Dexter, Missouri, Kiwanis Club, as well as Attorney for the Crowley's Ridge Recreational Center.

Brandon returned to his hometown in late 2014 when he joined this firm. He immediately became an active member in the Cape Girardeau County Bar Association by developing and chairing the first annual Doctors vs. Lawyers Golf Tournament, as well as volunteering with his family members at the SEMO Humane Society. Public Service has always been a hallmark of Brandon's life, and this has carried over in to his legal practice as he serves as certified Guardian ad Litem (Best Interests Attorney) for local children. He is a member of the lead panel of Federal Public Defenders, and assists the Missouri State Public Defender's office with local conflict cases. In his free time, Brandon enjoys playing golf with his family and friends, keeping up with his physical fitness, and is an avid supporter of both Mizzou and SEMO athletic programs.

Thank you for contacting us. We will get back to you shortly.

Please complete all required fields below.